The time has come for us to step out of our comfort zone. To go after what scares us and excites us at the same time.  That thing that makes pit of our stomachs quiver, now is the time. We have spent time finding excuses as to why we can’t (and those are innumerable), now let’s look at the benefits if we do this thing.

We have dreamt it, now its time to believe it, feel it and go for it. It is time we realized that the comfort zone is not so comfortable after all. Let yourself feel what it would be like to live your dream and you will realize how uncomfortable you really are in your comfort zone.

So today let’s step out of the comfort zone and see what you know to be true, be free!

What do I want to write about?  What is important to talk about? How about getting what you want?

Everyone says they deserve the best, but how many of us truly believe it? Clearly not a lot, and it is evident in the number of poor and unhappy people in the world. Most of us feel guilty about having things, we feel selfish if we go after what we want, we hide behind what other people think and what they perceive us to be. Some of are even indoctrinated into thinking that having money is a sin! (The people without usually come up with this).

We need to step out of our comfort zone, go for what we want and know that we deserve it and we WILL get it, the doors will open and what we really and truly want will become clear and answers/solutions  will be right there.

Affirmation: I am in tune with the Infinite and I can do what needs to be done. Through the power that dwells within me I can succeed, I can overcome, I can be what I want to be. 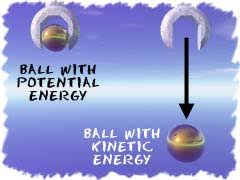 There is another form of energy in physics that we can use, it is called Kinetic Energy. This is otherwise known as the Energy of Motion.

We need to convert our potential energy into kinetic energy, in short we need to put our thoughts/ideas into action. One of the major things that stop the conversion is our expectations and our expectations affect our outcomes. If you expect to be disappointed (and most of us do) you usually are. You see, in that mode you look for the disappoints, so it is almost impossible to see the rewards. Oh, I hear some of you saying but I had expectations of rewards and was still disappointed.  Really?! I think if you are really honest with yourself and look deep within you would find that there was a part of you expecting disappointment. So change your expectations, believe that there will be rewards, look for the rewards, don’t focus the disappointments.

So let’s change our outlook/expectations and get the conversion started. Execute those ideas and be ready for the rewards.

Let’s go and convert our potential energy to kinetic energy!

We are so accustomed to identifying ourselves by what we have, what we have accomplished, what we earn, what others think of us, etc., that we have lost touch with our true and original self.

The fundamental truth, which we have forgotten, is the answer to the question “who am I?” and that answer is:

“I am a unique portion of the essence of God” which is, simply put “I Am”.

This answer has nothing to do with self-esteem, level of confidence, etc., it has to do with a simple truth; You came from magnificence and you are magnificent!

There is a story about a Zen master that goes like this:

“The Zen Master Hakuin lived in a town in Japan. He was held in high regard and many people came to him for spiritual teaching. Then it happened that the teenage daughter of his next door neighbor became pregnant. When being questioned by her angry and scolding parents as to the identity of the father, she finally told them that he was Hakuin, the Zen Master. In great anger, the parents rushed over to Hakuin and told him with much shouting and accusing that their daughter had confessed that he was the father. All he replied was, “Is that so?”

News of the scandal spread throughout the town and beyond. The Master lost his reputation. This did not trouble him. Nobody came to see him anymore. He remained unmoved. When the child was born, the parents brought the baby to Hakuin. “You are the father, so you look after him.” The Master took loving care of the child. A year later, the mother remorsefully confessed to her parents that the real father of the child was the young man who worked at the butcher shop. In great distress, they went to see Hakuin to apologize and ask for forgiveness. “We are really sorry. We have come to take the baby back. Our daughter confessed that you are not the father.” “Is that so?” is all he would say as he handed the baby over to them.”

From Eckhart Tolle. A New Earth: Awakening to Your Life’s Purpose

This Zen Master responded to falsehood, truth, bad and good news the same way, “Is that so?” He didn’t show any resistance, he didn’t participate in the drama. He was completely at one with what happened, so what happened had no power over him.

How would you have reacted to the different stages if this were you?

What this is showing us is that “Bad” turns to “Good” through the power of non-resistance. He accepted what he was given, the baby received loving care, and when the time came to give the baby back, he just let go….no resistance…no drama. He responded to whatever the present situation requires, instead of getting caught up in the drama. If you resist what happens, then you are at the mercy of what happens and you are no longer in control of your happiness and unhappiness, the world controls it.

Can you say “Is that so?” today and avoid all the drama?